The building of this classically Gothic church began in 1257 on the foundations of the original Romanesque chapel, which had become too small for the ever-growing number of Monks. Inspired by the great Cathedrals of Northern France, it measures 84 meters long and nearly 25 meters high.

The abbey is open every day from 10am to 7pm The Restaurant is open at lunch time (except on Mondays) and Thursday and Friday Evenings, before concerts and evening tours

How to get to Valmagne

Without reservation you cannot be guaranteed entry for the weekend of the «Patrimonie» in mid-September.

The tickets for the Abbey enable you to:
*A guided visit of the Abbey (approx. 1 hour), or a guide book with visitor information in the language needed — available languages: English, German, Spanish, Italian, Dutch, Russian.
*A tasting of the domain wines, one of the oldest in Languedoc.
*THE BOOKSTORE, which holds a large variety of guides on the Abbey in general, the Cisterciens, the Monks, plants, the wine and all that relates to the Abbey.
*THE GRAPE CONSERVATORY, which demonstrates the different variety which go into the making of our wines and produce our Bio wines.
*THE PORTER HOUSE, created in the 13th Century, (at the it was the Chapel and Museum and housed the groundskeeper and visitors to the Abbey).
*THE MEDIEVAL GARDEN which holds a variety of vegetables, fruit trees and medicinal plants used by the Monks in the Middle Ages.
*TEMPORARY EXPOSITIONS, the Abbey often holds expositions, either painting or other themes which are open to viewing without extra cost during the course of a visit. Our visitors often like to stay onsite for a couple of hours to get the most out of the visit.

Reservation is necessary either by fax, email or post. Our email address is info@valmagne.com.

HOW TO FIND US

The Abbey can be found on the D5 in between Montagnac and Villeveyrac and just north of Meze.
By motorway: From Nîmes exit signed Sète, then follow Mèze and at the second roundabout take the right towards the Abbey which will be approx. 8kms down that route.
From Béziers exit signed Agde then follow Pézenas then Montagnac. Once through Montagnac follow towards Villeveyrac and the Abbey will be approx. 7 km down that route.
Free parking, no security, next to the entrance of the Abbey for the buses and visitors. We recommend that you don’t leave any valuable objects inside your vehicle as the Association doesn’t take any responsibility in case of damage or theft to any objects or vehicles in the Abbey parking.

The ‘Abbaye de Valmagne’, XIIth and XIV th century, is a Cistercian Abbey located in the parish of Villeveyrac , close to Meze, not far from the ‘Etang de Thau’.

You will access to the site by a road of plane trees, several hundred –year-old -. You will there appreciate the 3 Gardens of Abbaye de Valmagne.

Inside the Abbey : the Cloister Garden

The Cloister Garden is surrounding the charming fountain. The Cistercian Monks following the Rule of St Benedict were not allowed to get out the Monastery . Inserted in the four galleries, this inner courtyard would allow them to admire blue sky and some nice greenery . The Citeaux roses , specially created for cistercian abbeys, the black bamboos,… bring to this garden a very particular charm.

Outside the Abbey : the Medieval Garden

Near the St Blaise chapel, which was also the “porterie” where the gardian use to stay, a medieval garden has been created on the model of St Gall. In the Middle Age, the monks used to grow plants to feed themselves, cure illness and decorate the Virgin Mary altar. This reconstitution shows the vegetable plants ‘hortus’ , the medicinal plants ‘herbularius’, a green cloister and a monk’s cimetery.

On the opposite side of the Medieval Garden: the ‘Grapes Conservatoire”

While walking through the path, each-one can identify the different graps used in the wines of this wellknowned Valmagne wineyards : Roussanne, Marsanne, Viognier , Syrah, Grenache, Mourvèdre, Morrastel …

In 1139 Raymond Trencavel, Viscount of Beziers founded the Abbey of Valmagne in the Parish of Villeveyrac, near the port of Meze on the «Bassin de Thau». From the XII th. to the XIII th. Century, Valmagne was one of the richest abbeys in South of France.

Originally Valmagne was founded under the Benedictine order but, in 1159, the monks joined the Cistercian movement.

The early days of the abbey constituted a period of great prestige, wealth and expansion, but then Valmagne suffered from the effect of the Hundred Years Wars, and later of the Religious Wars. The attack of the Hugenots in 1575, organised by Valmagne’s own abbot, gone into the Reformation, was a real disaster. Badly damaged, all the stained glass of the roses and clerestories were forever broken, and the abbey needed the next two centuries to recover some of its original splendour.

At the Revolution in 1789, the last five monks fled just ahead of rebellious peasants who invaded and ransacked the abbey, burning precious documents, funiture and works of art. Confiscated as a national property, the abbey was sold in 1791 to Mr Granier — Joyeuse who turned the church into a wine cellar, with the addition of big wooden vats in the nave and absidal chapels, preventing this magnificent edifice from becoming a stone quarry, like so many other abbeys.

The 29 th. of July 1838, following the death of Mr. Granier, the abbey and its dependencies were sold, this time, to the Earl of Turenne, and still remains in the possession of his descendants.

The actual church in classical Gothic style was begun in 1257 on the foundations of the original Romanesque chapel, which had become too small for the ever-increasing number of monks. Inspired from the great cathedrals of the North of France; it has 83 meters long and 24 meters high.

The cloisters have the exquisite charm of Tuscany gardens with its elegant and magnificent fountain that brings water from the spring of Diane.

Open to the public since 1975, Valmagne is well known to all archaeologists and lovers of old monuments. The restoration of the abbey is permanent, new bells have installed in the steeple in 2000. The owners have won many prices in recognition for the work done to restore the Abbey. 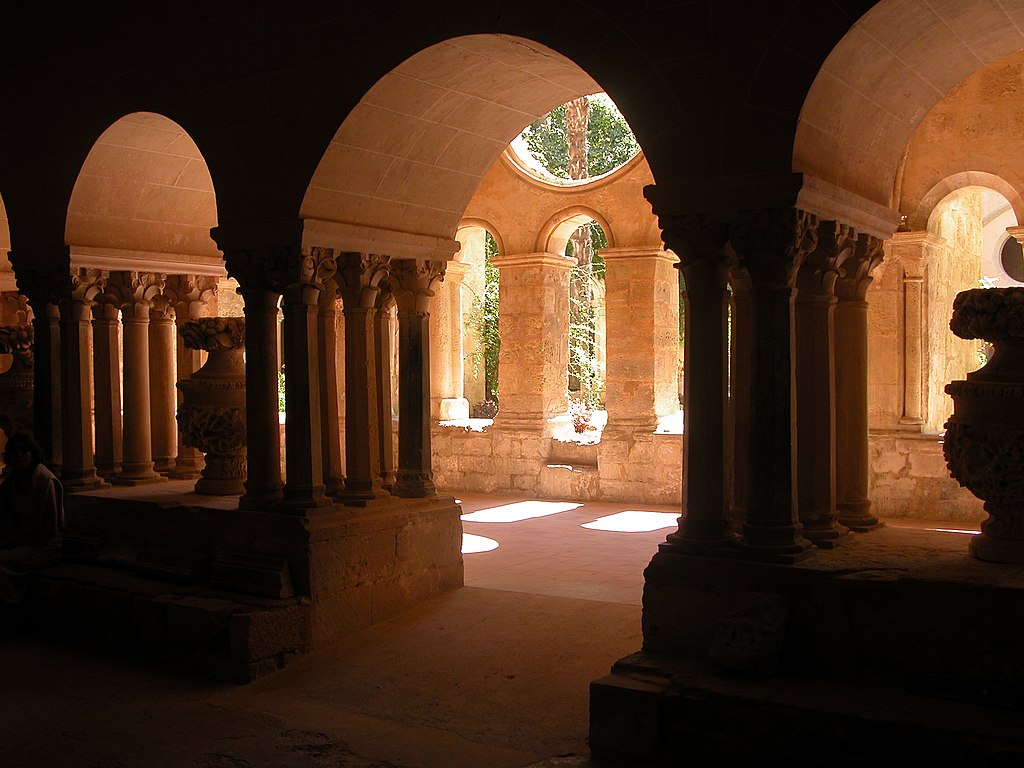 In 1985, 30 hectares out of a total vineyard of 75 hectares were classified «Appellation Contrôlée» and more may have the Appellation in the future. Situated on the gentle hills of our domain there are two distinct types of soil : the southern clay and chalk slopes produce most of the classified wines and some «Vins de Pays», while to the north, separated by a natural rocky barrier are 12 hectares of red soil from which comes our reknowed «Cuvée de Turenne».

In 1820 the vats made from Russian oak where installed in the church, hence the name «Cathédrale des Vignes». The cistercian monks planted vineyards here during the 12th century, as in many of their abbeys (the majority of the great Burgundy vineyards were of Cistercian origin) and since then our land has been planted with vines.

During the 19th century we exported to Mexico, and our produce was later sold during the twenties and thirties from a shop in Paris — Rue Mouffetard. Today, our wines are exported worldwide and distributed through France.

The vines are cultivated by machinery and special attention is given to natural fertilisation. Vinification and bottling are carried out following modern techniques : pneumatic wine press, controled temperature, scrupulous hygiene conditions and conditioned air store rooms. 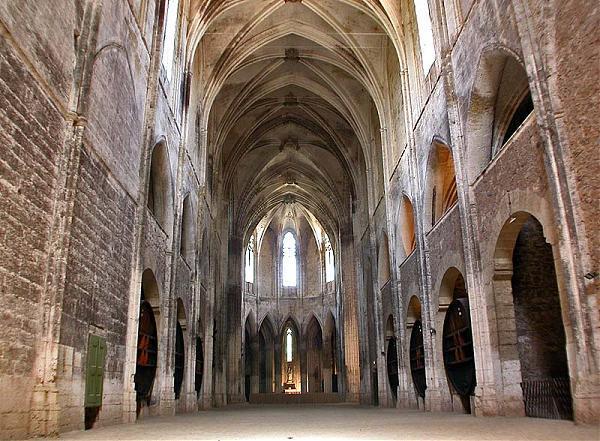 The grape varietals Syrah, Mourvedre and Grenache were planted in 1982 and first vinified in 1986. On certain well drained slopes they produce no more than 50hl/hectare. These wines are a typical example of our appellation : strong, well balanced with supple tanins which maintain their aromas of red fruits for several months.

This vineyard was planted on 5 hectares of land in 1988. After tasting several different varietals we decided to plant Viognier, Roussanne, Marsanne, Grenache blanc and Bourboulenc. Our first great year for the white wines was in 1994 when the vineyard had begun to mature and our vinifying techniques were well mastered.

Since then, as our orders have outgrown our supply, we replanted in 1998 three more hectares of Roussanne and Viognier.

These wines are typically meridional with delicious aromas of honey and apricot.

Our rosé is principally for the French market but is also much appreciated in summer by our english and germans visitors. Full well balanced wines with aromas of strawberry and raspberry made from Syrah, Cinsault and Grenache, the juice is «bled» from a first short maceration vinified in cooling vats. The wines can be drunk for up to two years.

The Abbey of Valmagne was acquired in 1838 by our ancestor the Count Henri-Amédée-Mercure de Turenne and in his honour we have given his name to our greatest wines. The production comes from the best parts of our domain recognised throughout Languedoc, and is a typical example of the new appellation «Grés de Montpellier».

are produced with Syrah and Mourvèdre giving fruity aromas, structure and depth. They are best drunk between 5 and 10 years old and are dominated by a smoky, truffle and bay leaf nose.

They are strong, well balanced and elegant wines, greatly enhanced after a year’s maturity in barrels.

are composed of Roussanne and Viognier and are vinified in new barrels during six months. They hence acquire a lovely golden color. Well structured wines with aromas of honey and dried fruits.

Both complex and elegant they can be drunk between two and four years.

This vintage honours the Cardinal de Bonzi who was the governor of the states of Languedoc and abbot of Valmagne during the 17th Century. He converted the abbey into his place of residence.

This famous red wine comes from the best of our Syrah and Mourvédre grapes. The grapes are turned to wine separately after a long maceration and 1 year in new wood. This wine is the alliance of strength and balance, with particularly delicate tannins and a light touch of wood giving it a perfect structure. It’s a wine to keep for 3 to 5 years.

The Abbey Beer is made with quality barley, oats, wheat and French hops, combined with elderflower, this gives it a aromatic palette.

The beer, known as a «double» style, has a very ample and full body with a clear taste of alcohol, a typical cloudy complexion with strong copper colour and a compact head.

In the mouth she offers a taste of barley, roasted stewed yeast — specially selected, and this gives her the rare roundness you can find in this beer.

The beer is made in collaboration with Brasserie d’Oc.

How it is made

Originally from Belgium, the beer is produced according to the methods of the Trappist Monks under licence from the Monestaries who hold the method.

The beer is traditionally refermented in bottles in order to vitamins created by the fermentation.

Other than the «double» beer, there also exists the triple with a much stronger alcoholic content (between 8 and 10%) and whose colour is a yellowish brown with spicy notes.

Like in all the Abbeys at that time, the monks of Valmagne would consume the beer made in the Abbey everyday, with the wine reserved for special parties and passing guests.