Even without its château, the quiet village of AZAY-LE-RIDEAU, 27km
southwest of Tours, would bask in its serene setting, complete with an old mill
by the bridge and an ancient church. On its little island in the Indre, the château
is one of the loveliest in the entire Loire region: perfect turreted early Renaissance,
pure in style down to the blood-red paint of its window frames. The
village’s apparently odd name needs some explanation: rideau doesn’t actually
mean “curtain”, but derives from the Ridel family, who occupied a minor
fortress at Azay in the thirteenth century. In fact, the village was known for
centuries as Azay-le-Brûlé (“the burnt”), after the Dauphin Charles smoked out
a Burgundian garrison here in 1418. 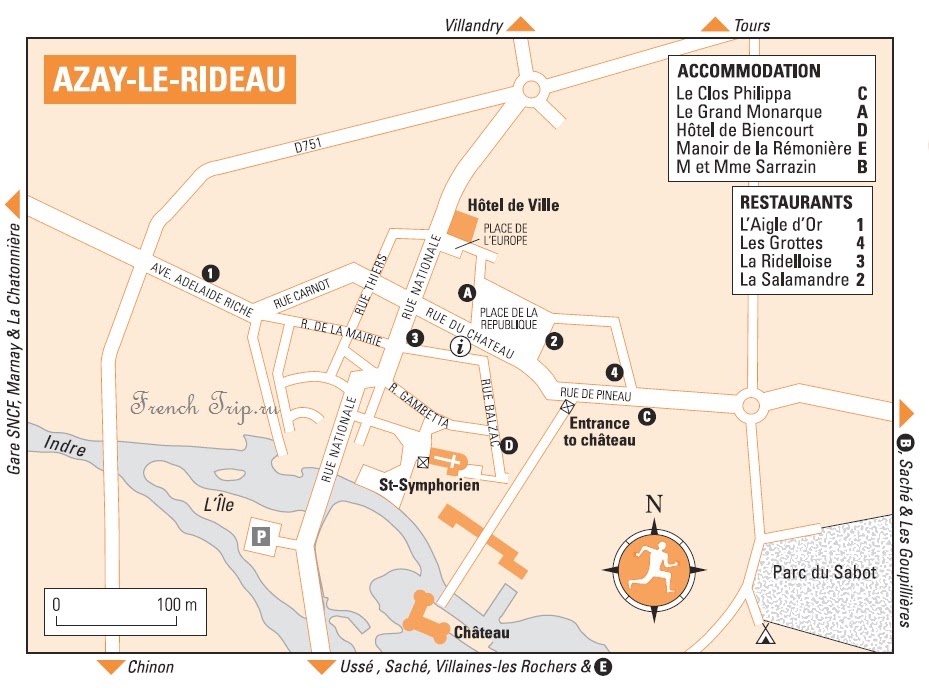 Arrival and information
Trains from Tours call at Azay-le-Rideau on their way to Chinon roughly
every two hours (some services are replaced by SNCF buses). Cyclists should
pick up the SNCF’s useful leaflet, Autour du Train (wautourdutrain.free.fr),
which gives timetable information and recommends a thirty-kilometre oneway
route, stopping off at Villandry on the way between Tours and Azay-le-
Rideau. The gare SNCF is awkwardly situated a fifteen-minute walk west of
the centre, along ave Riché.
Azay’s tourist office (May, June & Sept Mon–Sat 9am–1pm & 2–6pm,
Sun 10am–1pm & 2–5pm; July & Aug Mon–Sat 9am–7pm, Sun 10am–6pm;
Oct–April Mon–Sat 9am–1pm & 2–6pm; t02.47.45.44.40, wwww
.ot-paysazaylerideau.fr) sits just off the village’s main square, place de la
République. The bus stop is just behind, next to the Hôtel de Ville.
You can rent bikes from Cycles Leprovost, 13 rue Carnot (t02.47.45.40.94;
closed Mon & Sun). Canoes can be rented from La Plage, on L’Ile – just before
town when approaching from the south (daily 11am–7pm; t06.61.21.80.29).

The château
The romantic hero of Balzac’s novel Le Lys dans la Vallée described Azay-le-
Rideau’s château (daily: April–June & Sept 9.30am–6pm; July & Aug 9.30am–
7pm; Oct–March 10am–12.30pm & 2–5.30pm; e7.50; wwww.monum.fr) as
“a diamond cut with facets, set in the Indre, and mounted on piles hidden by
flowers”. The flowers may have been tidied away in the last century and a half
but “diamond” remains exactly the right word: Azay really is the most precious
and captivating of all the Loire’s châteaux – and the one requiring the most
minute examination if you want to discover its true value. The setting in the
waters of the Indre remains as exquisite as when Balzac saw it, the famous
reflection now fringed by the mature trees of landscaped gardens. You’ll have to
pay the entrance fee if you want to have a good look at the outside, as the
château is hidden away behind high walls and a leafy driveway.
Begun in 1518, Azay was one of the very first truly Renaissance châteaux to
be built in France, an expression of the new wealth, power and cultural ambition
of the merchants and bankers of Tours who surrounded Louis XII and François
I. Azay’s builder, Gilles Berthelot, was one of four powerful French treasurers.
He was also a close relation of Jacques de Beaune-Semblançay, the great banker
behind François I’s overspending, and a cousin of Catherine Briçonnet, the
grande dame of the château de Chenonceau, which predates Azay by just five
years. In an atmosphere of fierce rivalry for cultivated extravagance, Berthelot
threw up his château as fast as he could, famously getting his team of mason
Etienne Rousseau, sculptor Pierre Maupoint and carpenter Jacques Thoreau –
all Frenchmen, despite the Italian influences in their designs – to work literally
day and night. Even so, Azay wasn’t finished before Berthelot and his cronies fell
from favour in the huge corruption scandal of 1527 (see p.334), and what stands
today is probably only half a château. It’s likely that the original plan would have
been for four identical wings enclosing a courtyard, and you can still see a rough
edge where work stopped in 1527, when Berthelot fled for Metz.
The courtyard is dominated by the great open staircase, a structure as
important as the feudal towers of earlier châteaux in defining the status of the seigneur. It even looks like a tower in reverse, a space carved out of the main
body of the château, with flat, lace-like encrustations of stone carving defining
the space behind. The balustrades on the first- and third-floor levels of the
staircase bear the emblems of François I and his wife, the salamander and the
ermine, while delicately carved Classical motifs crawl over the creamy stone.
The loggia-like pairs of the staircase’s window arches are particularly Italian in
inspiration. There is one anomaly: the large tower on the right as you approach
the courtyard was added in the mid-nineteenth century, replacing an incongruous-
looking medieval tower that Berthelot never got round to
demolishing.
You don’t need to know anything about architecture to love the southern
facade of the château: it’s breathtakingly pretty, rising out of a broad, pool-like
meander of the slow-moving Indre. The perfect symmetry is striking, each
corner finished off by an échauguette tower daintily suspended just above the
water level, each row of windows defined by a neat horizontal stringcourse and
delicate pilasters pointing up to the dormers in the roof, the whole facade
drawn together by the noble windows of the central axis. A guard-walk runs all
the way round the topmost level, but it’s hardly a fortification – the machicolations
look suspiciously like a Classical cornice.
The interior, dolled up with the usual miscellany of period and reproduction
furnishings and tapestries of all eras, doesn’t add much to the experience, but
the grand staircase is worth seeing close up. The medallions of the kings and
queens of France on the first flight are nineteenth-century additions, while
those in the loggia above date from the sixteenth century, depicting kings,
philosophers and possibly Gilles Berthelot and his Blésoise wife Philippe
Lesbahy. The ground floor was refitted by the Marquis de Biencourt, the
château’s owner in the nineteenth century, with the obligatory library and
billiard room. The gardens are another of Biencourt’s additions, fashionably
styled as an English landscaped park.
Azay’s nocturnal spectacle, “Songes et Lumières” (July & August daily; early
Sept Fri & Sat only; e9, or e12 with daytime château entry), is one of the
region’s better efforts. Beginning at nightfall (times vary from 9pm to 9.45pm),
elaborate lighting and sound effects transform the château into the centrepiece
of a fantasy world, with fantastic creatures projected onto the facade. You can
wander freely round the grounds admiring the spectacle from all angles, while
being serenaded by loudspeakers hidden behind bushes.