Best of castles for children

Dungeons, crenellated walls, turrets, but also furniture, objects and stories: everything is there to stir their curiosity and their imagination to soar. Here are 10 castles to visit with children.

It seems straight out of a tale by  Perrault: a majestic dungeon walls with battlements, towers with pointed roofs reaching towards the sky … In the ruin for two centuries, bought in 1810 by Napoleon to 3000 francs, he now belongs to the state, which holds its value for «priceless». Fully restored — recreated some would say — toXIXth century by Eugène Viollet-le-Duc at the request of Napoleon III, who wanted to make an imperial residence, the castle of Pierrefonds regularly serves as a backdrop to the medieval movies: The Visitors in 1993, Joan of Arc in 1999 Kings cursed in 2005.

The royal castle of Provence, built on a rocky islet in Tarascon, displays a knightly look. Started in 1400, it is one of the most beautiful feudal castles of France. After the large pieces of Gothic and Renaissance architecture, and ancient dungeons of the apothecaryXVIIIth century, the visit ends on the terrace, with a superb view over the city and the countryside. An ideal setting to narrate the adventures of the famous hero of Alphonse Daudet: «Tartarin, Tartarin, the intrepid, the great, the incomparable Tartarin …»

For Pierre Loti who as a child spent his holidays in the neighboring town of Saint-Porchaire, between Rochefort and Saintes, the keep in ruins, perched on its rocky outcrop, and the park fallow the castle of La Roche-Courbon were those of The Sleeping Beauty. Today, the arcades, the staircase landing and double French gardens of the medieval building, rejuvenated under Louis XIV, was fully restored. Classified «Remarkable Garden» and the massive topiary La Roche-Courbon rest on stilts. 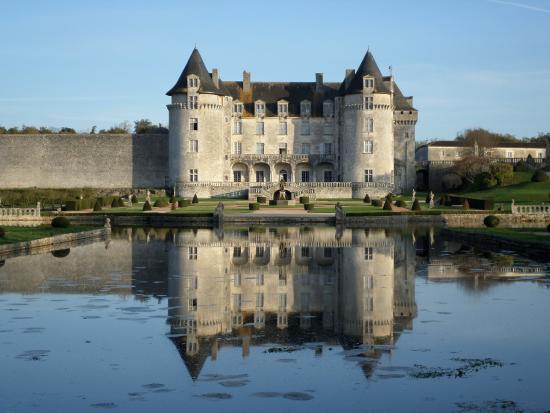 When, at the turn of the dark forest of Chinon, popped his tall figure in white limestone bristling with towers, turrets, chimneys and a dungeon, it’s like in a fairy tale. Clinging to a hillside above the Indre and protected by a feudal system of defense with ramparts and battlements, the castle would be where Charles Perrault imagined the tale of The Sleeping Beauty. In the dungeon, wax figures evoke the history of the bewitched princess awakened by her prince charming. A room of old games will also interest children. The curious observe the mark left by each time (XVe,XVIe,XVIIe andXIXth centuries) in the construction of the castle.

Built in XIVth century and constantly reworked, including Louis XVI and NapoleonIer, the castle goes for his sets (Renaissance marble hall, rococo woodwork, Pompeian bathroom) but even more for its gardens and outbuildings. Made for the Princess de Lamballe, the Chaumiere shellfish (1780) hides a sublime decor and pearl shells. Created for Marie Antoinette, Dairy Queen (1787), where we played the farmer coming enjoy freshly fired in a porcelain bowl shaped breast milk, includes a rotunda, an artificial cave decorated with a nymph statue with the goat Amalthea and a pavilion decorated on the theme of the four seasons.

Between forest and meadows, encircled by huge moats, it impresses with its appearance of a fortress, with its thick walls, its powerful corner towers, a dungeon whose battlements, and its gatehouse double drawbridge. Then spent the successive bridges, courtyard presents the image of a pleasant mansion with arcaded walkway, tall mullioned windows and large skylights. Built in five years (1468-1473) and almost untouched since it is the perfect example of the transition between the Middle Ages and Renaissance. The highlight of the tour (must be guided): The painted wooden ceiling (XVth century) of the guardroom, drawings full of vigor, humor and mystery. Perfect example of French classicism, built in XVIIth century and inhabited by the same family since, Cheverny seduced by its unity and authenticity. Is this the reason that prompted Herge to be inspired to draw the castle of Moulinsart in the albums of Tintin  ? In any case, it is a castle that kids love. A: It is richly furnished (toilet accessories, wedding dresses, cribs and family photos included) and little free guides make the speaking tour. Two: the permanent exhibition «The Secrets of Moulinsart» revives the events staged by Hergé Moulinsart. Three: you can walk in the beautiful park by car or electric boat.

To discover this fortress, the children are invited to follow in the footsteps of Princess Mathilde and Hugo knight . To save Dynasty Fleckenstein , they will face twenty challenges and thwart the plans of a thief and a witch. The castleXIIth century, transformed by descendants of Gottfried Fleckenstein in fortress impregnable and majestic, dominates the forests of the Vosges of North and Palatinate . Ruined during theXVIIth century, however, it remains a witness to the evolution of a medieval fortress.

«Malbrough you goes to war mironton mirontonton mirontaine» … This children’s song is familiar to you, but do you know that the character of Marlborough has really existed? And a castle on the border of the Moselle , bears his name? Preparing for the invasion of France, the Duke (English) Marlborough (nicknamed «Malbrouck») had his headquarters in the fortressXVth century posted on a wooded hill. The defensive work was the subject of a restoration that has restored its splendor with large round and square towers and drawbridge. Today it houses temporary exhibitions (in 2012: artist Ben) and various cultural events.

This is the castle of Pau was born in 1553, Henry III of Bearn-Navarre, the future Henri IV , King of France and Navarre. «Nouste Henric  ,» as the Béarn, was the son of Antoine de Bourbon and Jeanne d’Albret. It is said that his grandfather, Henri d’Albret, rubbed his lips with garlic and moistened with jurançon, so that the child is «neither reluctant nor weeping!» Another curiosity: the cradle of the child was none other than a turtle shell , which can be seen even today when visiting the castle. This was converted toXIVth century in real stronghold by another great prince of Bearn, Gaston Phoebus, the fort dating back to the originalXIth century. 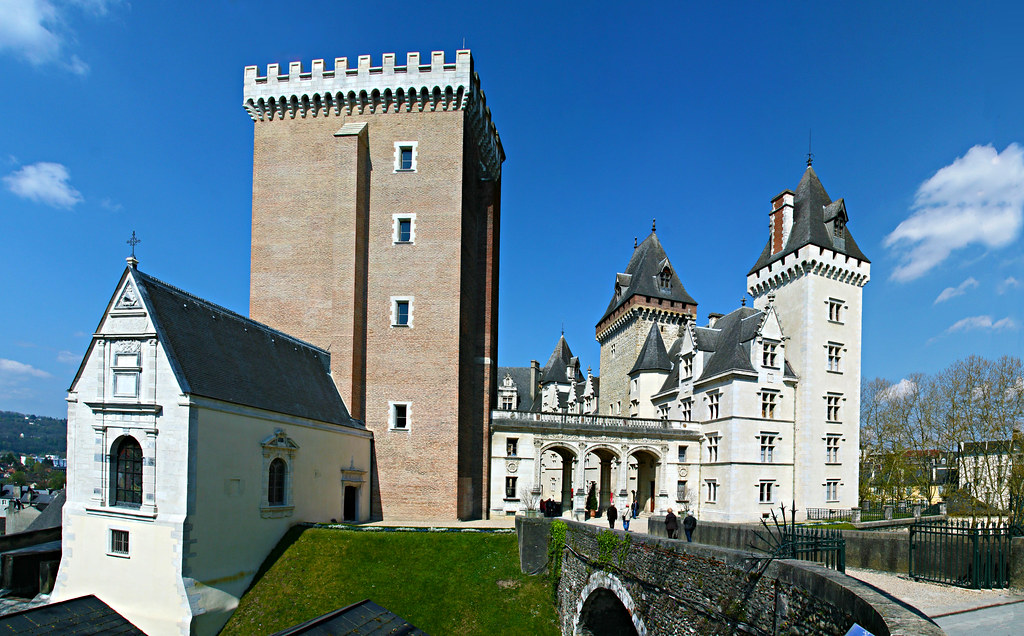